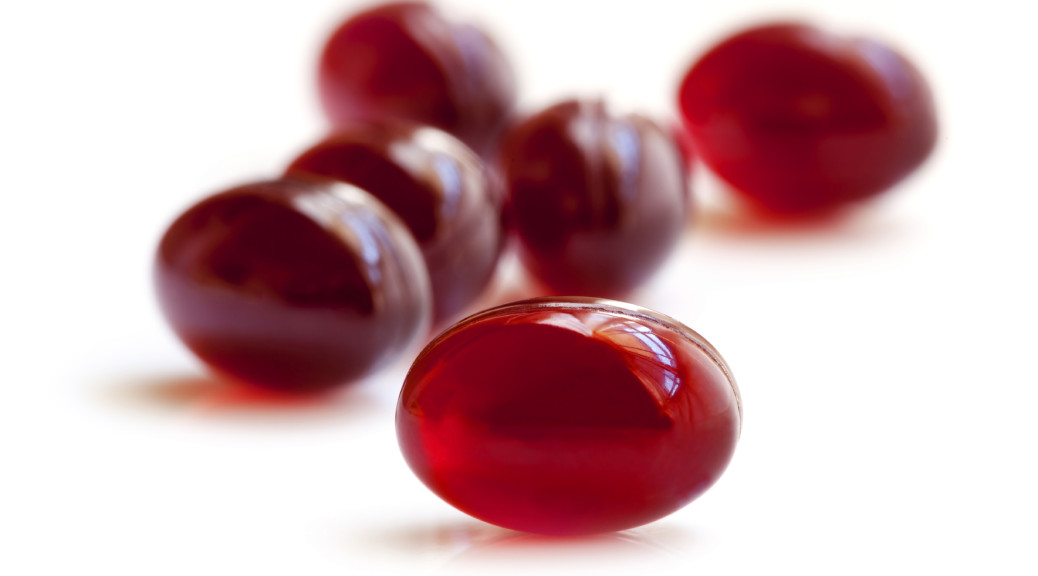 Krill oil naturally contains astaxanthin, making it a superior choice as a source of high quality animal-based omega-3 fats. Astaxanthin is also a unique marine-source flavonoid – that creates a special bond with the EPA and DHA, which allows direct metabolism of the antioxidants, making them more bioavailable.

The phospholipid structure of the EPA and DHA in krill oil makes them much more absorbable. Krill oil also contains vitamin E, vitamin A, vitamin D, and canthaxanthin, which is a potent antioxidant.

The initial studies on krill oil showed an analysis of the components of krill oil (particularly omega-3s, phospholipids and astaxanthin) were in these percentages:

These studies have shown the initial promise of krill oil as a supplement with significant benefits for humans. As more research on krill oil becomes available, we will be able to describe the benefits of krill oil supplements at different concentrations of phospholipid, different dosages, and different formulations (added astaxanthin, EPA, DHA, choline, vitamin D, and many others.)

Most krill oil comes in a small gelatin capsule, while some comes in a softgel. Typical dosage forms are 300 mg and 500 mg. Capsules larger than 500 mg are uncommon for reasons having to do with unique encapsulation features of krill phospholipids.

If you’re still not convinced of the antioxidant powers to krill oil, independent ORAC evaluations have also established that genuine krill oil contains:

– Over 47 times the antioxidant power of lutein

– Over 34 times the antioxidant power of coenzyme Q-10

How much krill oil should I take?

Since the FDA has not established daily recommended allowances for omega-3s, such as those found in krill oil and fish oil, you may want to experiment a little with this. We know people who are taking 8,000mg a day as part of clinical trials and showing no bad effects. On the other hand, we know people who say they are seeing benefits from taking as little as 500mg per day.

So you might want to consider a comparison between dosage and value. For this a little math may be necessary to determine what type of krill oil to buy. For instance, some krill oil comes in a package containing 300mg-size capsules, and will sell for less than a package of krill oil coming in 500mg capsules. However, the total number of milligrams in the 90-count package of 300mg pills adds up to only 27,000mg, whereas the total amount of milligrams in the 60-count package containing 500mg pills adds up to 30,000mg. If you take three of the 300mg pills, you are getting 900mg, whereas if you take two of the 500mg capsules, you’re getting 10 percent more of the krill oil and its benefits.

Another way to think of it is that with the package of 300mg pills, you’re actually getting 10 percent less, thus the lower price. Consumer beware, as they say.*

Other benefits of Krill*

* These statements have not been evaluated by the FDA. Mentioning of any ingredients or products is not intended to diagnose, treat, cure or prevent any disease. The information provided on this website should not in any way substitute for the advice of a healthcare professional and is not intended to constitute personal medical advice.

* These statements have not been evaluated by the FDA. Mentioning of any ingredients or products are not intended to diagnose, treat, cure or prevent any disease.